Ashwagandha (Withania somnifera, Dunal) is one of the most revered Indian botanical plants today and is the flagship herb of Ayurveda for over five millennia.

It is referred to as the “The Prince of Herbs”, as it embodies the very essence of preventative and curative approach to health. According to the HerbalGram report, Ashwagandha was the 5th highest selling herbal ingredient in the US natural retail channel in 2019 with $13.7 million in total sales (based on the SPINS data covering the 52 weeks ending December 2019). In fact, a latest report by the American Botanical Council states that the sales of Ashwagandha saw a massive growth of 185% in 2020.

Why is Ashwagandha so popular?

Ashwagandha is one of the oldest known adaptogens, and its power lies in its roots. The word Ashwagandha stems from the Sanskrit word “Ashva” meaning horse, and “gandha” meaning smell, signifying the horse-like scent of the root. It translates to “strength of the stallion.” Ashwagandha is classified as a Rasayana, and is believed to promote youth, longevity, and rejuvenation. Modern Science has recently come along to put Ashwagandha under the microscope, finding that the herb is rich in beneficial biochemical components such as withanolides, glycosides, alkaloids, flavonoids, and numerous amino acids and more. The synergistic effect from this diverse set of active constituents endows Ashwagandha with its unique therapeutic benefits. Dozens of clinical trials have suggested that Ashwagandha supports many aspects of health from reducing stress and anxiety to boosting both brains and brawn. 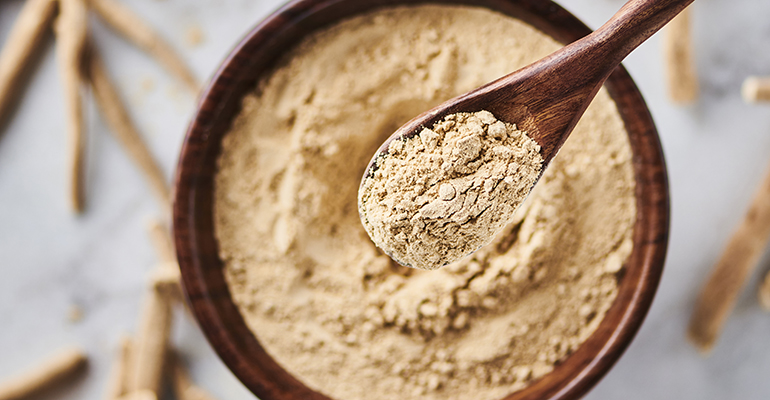 Ashwagandha operates at the level of the overall body system by helping maintain balance in the substances and processes running in the human body. Ashwagandha has a multitude of benefits. Take a look at few of the benefits here:

Ashwagandha originally earned its place on the supplement shelf as a stress busting superstar. Researchers have largely attributed the effect to the plant’s ability to help in the regulation of cortisol levels, primarily by balancing sympathetic and parasympathetic nervous system via the HPA axis. Multiple studies have suggested that Ashwagandha root extract reduces the feelings of stress and anxiety, as well as levels of cortisol.

Ashwagandha improves the body's defense against disease by improving the cell-mediated immunity and humoral immunity. Over the last two decades several studies were published to demonstrate the immunomodulatory activity of Ashwagandha. An oft quoted article “Public Health Approach of Ayurveda and Yoga for COVID-19 Prophylaxis” demonstrated the different ways in which Ashwagandha can help in regulating inflammation and enhancing immunity.

Ashwagandha is referred as a game changer in Sports Nutrition. It is known to increase the energy production in muscles through its beneficial effects on the mitochondria, producing energy through the formation of ATP. The benefits of Ashwagandha are not only limited to performance, endurance and strength, but also to all the factors that affect sports performance.

Plummeting libido is a rising problem across the globe. The causes of low libido can be either physical, physiological, or psychological. A little Ashwagandha does wonders for the libido. Ashwagandha is also revered as an aphrodisiac in Ayurveda and is used to treat sexual dysfunction and infertility in men. According to current research, the herb boosts poor sperm counts.

Clinical studies conducted with Ashwagandha presented evidence that this ingredient supports sexual function and wellness in both men and women. In men, Ashwagandha contributes in two ways to restoring a healthy sex life. Firstly, it helps to produce natural testosterone and revitalizes men’s natural sex equilibrium. Secondly, the Adaptogenic property of Ashwagandha helps in delaying the reduction of natural testosterone, thus significantly mitigating stress response. Research has shown that Ashwagandha can boost fertility by regulating the sperm levels and testosterone in men.
Low sexual desire is not uncommon in women. Stress and hormone imbalances can affect the sexual health and cause the early onset of menopause in women. Research among healthy women found that Ashwagandha supplementation demonstrated a significant improvement in sexual arousal, lubrication, orgasm and overall satisfaction in women. A recent study on ashwagandha, demonstrated the ability of the root extract to alleviate the climacteric symptoms during menopause.

Ashwagandha is long known and relied upon for its sleep-inducing effects. In Latin, the species name somnifera means sleep inducer referring to the use of Ashwagandha as a sedative and a nervine. Ashwagandha promotes healthy sleep in two ways: by impacting sleep directly and by lowering stress which indirectly benefits sleep. Studies conducted by independent researchers have shown that Ashwagandha may improve sleep quality, total sleep time and sleep efficiency in healthy adults and individuals with sleep disturbances.

Thyroid hormones have an enormous impact on health, affecting all the aspects of metabolism and influence the control of vital functions. Women are 5 to 8 times more like to then men to have thyroid problems with 1 in 8 developing a thyroid disorder in her lifetime. As an adaptogen Ashwagandha is known to rejuvenate health, maintain homeostasis and regulate thyroid function and hormone balance in the human body. Researchers found that Ashwagandha may be beneficial for normalizing thyroid indices in adults with subclinical hypothyroidism.
KSM-66 Ashwagandha in the Spotlight

KSM-66 Ashwagandha is the most clinically studied Ashwagandha on the market with 24 Gold Standard Human clinical trials. It is a branded, full-spectrum extract, with the highest concentration of all major root only extracts available on the market today. It is the fastest growing Adaptogenic botanical ingredient, with a global market share of more than 65%, and in 1200+ products worldwide. KSM-66 Ashwagandha has the highest number of quality certifications of any botanical extract in the market. It is produced using a unique proprietary extraction process, based on “Green Chemistry” principles, without using alcohol or any other chemical solvent.

Interested to know why KSM-66 is the world’s best Ashwagandha ?