The European Food Safety Authority (EFSA) provides scientific support and advice on risks to human and animal health regarding the possible emergence, spread, and transfer of antimicrobial resistance (AMR) in the food chain and animals.

“EFSA acknowledges that AMR is a pressing public health issue that needs to be tackled at the global level and across sectors,” says Pietro Stella, a scientist in the EFSA’s biological hazards team.

“Prudent use of antibiotics in farm animals should be the norm, not the exception, as the misuse and overuse of these medicines to treat livestock poses serious risks for human health,” says Emma Calvert, senior food policy officer at BEUC, the European consumer organisation. “It is, therefore, encouraging that the EU Farm to Fork Strategy includes an ambition to halve the use of antimicrobials by 2030.”

In a briefing note to the French presidency of the EU Council, organisations highlighted the importance of co-operation across disciplines, sectors, and countries in the approach to AMR. Advocacy for this alignment echoes the primary outcomes of the review carried out in 2017, stressing that there is no one-size-fits-all solution.

“Successful strategies follow an integrated, multifaceted approach which takes into account the local livestock production system and involves all relevant stakeholders,” says Stella. Monitoring AMR is “fundamental to assess the effectiveness of the measures taken”, he adds.

In their latest joint inter‐agency report on integrated analysis of data on antibiotic consumption and the development of AMR in Europe, the organisations involved concluded that the use of antibiotics has decreased and is now lower in food-producing animals than in humans, says Stella. “This is a positive sign as it suggests that the measures taken at country level to reduce use are proving to be effective,” he adds.

However, despite available data suggesting there has been a reduction in antibiotic consumption in recent years, AMR remains a serious problem, Stella says. “There is a need to reinforce interventions and promote prudent use of antimicrobial agents, and infection control and prevention, in both humans and in food-producing animals,” he adds.

BEUC agrees, with Calvert saying: “While the consumption of antibiotics by farm animals is already following a decreasing trend in the EU on average, the EFSA report in March 2022 highlighting the continued high levels of antibiotic resistance in salmonella and campylobacter demonstrates the continued vital need for these new restrictions.”

Many issues also still need to be explored, the EFSA states. For example, experts are currently working on an assessment examining the risk of antimicrobial-resistant bacteria spreading during animal transport. The research will focus on the risk of resistant zoonotic bacteria spreading among poultry, pigs, and cattle during transport to other farms or slaughterhouses.

“The challenges ahead are many, but the amount of knowledge that is becoming available will enable EU leaders to tackle the growing issue of AMR more effectively,” says Stella. 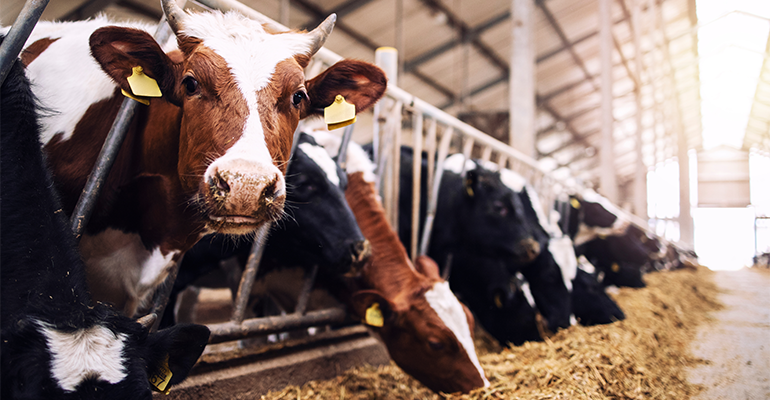 The role of the food industry

Everybody can play a role in combatting AMR. “We cannot afford to return to the pre-antibiotic era, living in a world where a simple infection may lead to severe adverse effects, even to death,” says Stella.

In 2021, experts assessed the role of food-producing environments in the emergence and spread of AMR. The findings identified faecal origin, irrigation, and water fertilisers as the most significant sources of AMR in plant-based food and aquaculture. In terrestrial animal production, potential sources are feed, humans, water, air or dust, soil, wildlife, rodents, arthropods, and equipment.

“Education and awareness of AMR should be addressed to all levels of society but in particular to veterinarians and farmers,” says Stella. Implementing the highest hygiene and food safety standards during food production is expected to contribute to preventing the transmission of resistant and non-resistant bacteria throughout the food chain, Stella adds.

“Moreover, AMR is not a problem which stops at the EU’s borders. It is a global issue with global ramifications,” says Calvert.

“It is therefore welcome that the new veterinary medicines legislation foresees third-country producers who export animal products to the EU being subject to some of the law’s new restrictions, for example, antimicrobials used for growth promotion,” Calvert continues.

“However, the European Commission has still not come up with the delegated act that is necessary for this rule to apply.”