A new study published in the Journal of the American Heart Association found that a daily snack of 42 grams of almonds instead of a high-carbohydrate muffin with equivalent calories, consumed as part of an overall healthy diet, improved a number of heart disease risk factors in study participants. In addition to significantly improving LDL and total […] 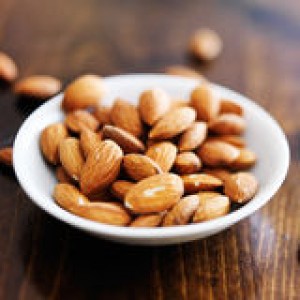 A new study published in the Journal of the American Heart Association found that a daily snack of 42 grams of almonds instead of a high-carbohydrate muffin with equivalent calories, consumed as part of an overall healthy diet, improved a number of heart disease risk factors in study participants. In addition to significantly improving LDL and total cholesterol, snacking on almonds instead of muffins also reduced central adiposity (belly fat); all three are well-established heart disease risk factors.

Although heart disease remains the number one cause of death worldwide, it is estimated that at least 80% of premature deaths from cardiovascular disease can be avoided if diet and lifestyle risk factors are controlled. While a large body of evidence has demonstrated that almond consumption is associated with improved heart health, this is the first and largest controlled feeding study using identical diets (with the exception of almonds vs. a calorie matched snack) to investigate and isolate the cardio-protective properties of almonds beyond their contributions to an overall heart-healthy diet.  The findings are also the first of their kind to show benefits of eating almonds in terms of reducing body fat – specifically abdominal and leg fat. Reducing abdominal fat is of particular benefit given its connection to metabolic syndrome and increased risk for heart disease.

The twelve-week randomized, controlled clinical study, led by researchers at Penn State University (US), was conducted in 52 overweight, middle-aged adults who had high total and LDL cholesterol but were otherwise healthy. Participants ate identical cholesterol-lowering diets with the exception of a daily snack of either 42 grams of whole natural almonds or a banana muffin, which provided an equivalent number of calories. Participants were provided all meals and snacks in amounts based on their calorie needs to maintain body weight, and followed each diet for six weeks.

Despite no differences in body weight or total fat mass, the almond diet significantly reduced abdominal fat mass, waist circumference and leg fat mass, compared to the diet with the muffin snack.

“The study found that substituting almonds for a high-carbohydrate snack improved numerous heart health risk factors, including the new finding that eating almonds reduced belly fat,” said Claire Berryman, PhD and lead researcher of the study. “Choosing almonds as a snack may be a simple way to help fight metabolic syndrome and cardiovascular disease.”

This study joins nearly two decades of research which shows that almonds can help maintain a healthy heart and healthy cholesterol levels, and provides new evidence showing that regularly eating almonds instead of a high-carbohydrate snack may have benefits on body composition.  Previous studies showed that regular almond consumption did not lead to significant changes in body weight, indicating that nutrient-rich almonds can be incorporated in weight-maintenance and weight-loss diets.