Today, Egypt is home to a fast-growing economy and is quickly emerging as a key hub for regional food exports in North Africa. In just a few years, the country has undergone a drastic economic transformation focussed on restoring the competitiveness of its food ingredients market.

In 2016, economic reforms were implemented, by the Egyptian government in order to restore economic stability in Egypt. This involved improving the functioning of the foreign exchange market, lowering the government deficit and debt, and improving Egypt’s business climate.

Egypt’s exchange rate witnessed major depreciation at the end of 2016, and thereafter its exchange rate remained relatively stable with regained economic competitiveness. With this, safety and security were also restored. According to the Gallup Global Law and Order survey, Egypt placed 16th out of 135 safest countries, and hotel reservations totalled 84 million in 2017, up 150% from 2016. Meanwhile, visitor numbers reached 8.3 million in 2017, up from 5.4 million a year earlier, with arrivals from Europe increasing by 81%. Denmark, Norway, Finland and Sweden also lifted their travel bans on the Sinai peninsula in the same period, following in the footsteps of Germany.

David Lipton, First Deputy Managing Director at IMF said: “The results are clear: macroeconomic stability and market confidence have been restored, growth has resumed, inflation has fallen, and the public debt ratio is expected to fall for the first time in nearly a decade.”

Egypt as a market

Egypt’s total population was estimated to be 99.4 million in 2018 according to the latest census, growing at a yearly rate of 2.2%, making consumption and domestic demand a significant driver for economic activity. Recent economic reforms are finally harvesting their fruits, as the International Monetary Fund expects economic growth in Egypt to reach 5.5% in 2019 and 6% by 2023 according to its new World Economic Outlook report.

Subir Lall, Head of the IMF in Egypt described: “With nearly 100 million people and a geographic location that provides excellent access to important foreign markets, Egypt has immense potential.”

Egypt holds a large and rapidly growing consumer base with the largest population across the Middle East and North Africa. Food represents 40% of the consumption basket according to CAPMAS, Egypt’s statistical agency. The spending per capita on food and non-alcoholic beverages is forecast to grow from USD $262 in 2017 to USD $436 by 2022. 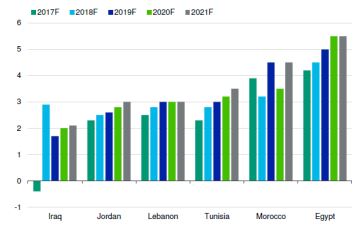 Nearly one-fifth of imports consist of foodstuffs, with agricultural exports including rice, onions, garlic and citrus fruit. Egypt has ambitious plans to modernise its food processing sector, with the ultimate aim of increasing the export markets across the Middle East and Africa in particular. Free trade agreements with neighbouring Middle Eastern countries are leading to an increase in export demand for processed foods from Egypt, such as frozen vegetables, dairy products, juices, herbs, spices and confectionery products.

Egypt’s exports of processed and manufactured food reached nearly USD $2.6 billion in November 2017, of which USD $1.1 billion were attributed to regional markets such as Saudi Arabia, Libya, and Jordan. Top exports were edible oils, processed cheese, sugar and confectionery.

Exports to the EU have also been increasing. Under the terms of their free trade agreement, the EU has free access to the Egyptian market for around 90% of its agricultural and fishery exports, while around 70% of Egyptian agricultural products have free entry to the EU. The EU is Egypt’s biggest import and export partner, covering 29.7% of Egypt’s trade volume in 2017.

Reflecting the improvements in the economy, major foreign investors such as Kellogg, Cargill, Pepsi and Coca-Cola have been showing growing interest in mergers and acquisitions in Egypt. 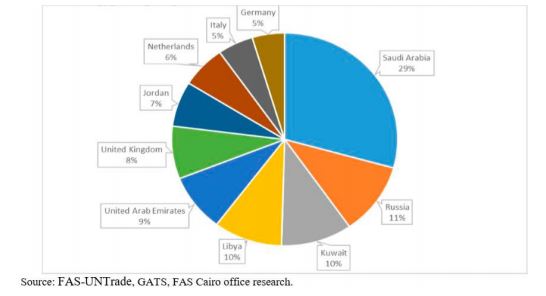 In 2016, Egypt ranked second among Arab countries for the amount of foreign direct investment it attracted. This is a result of the range of new legislative and regulatory measures aimed at boosting foreign direct investment in Egypt. Of these, the most important in recent months has been the announcement of the new investment law at the end of May 2017. This long-anticipated legislation established a number of investment guarantees, such as equal treatment for foreign and national investors, the granting of residence rights for the duration of projects, protection against nationalisation or the seizure of funds without a court order, as well as the right to transfer profits abroad.

The agreement also helped Egypt secure a range of trade agreements with foreign nations, including with the EU. Trade between the EU and Egypt more than doubled from €11.8 billion in 2014 to €27.9 billion in 2017. 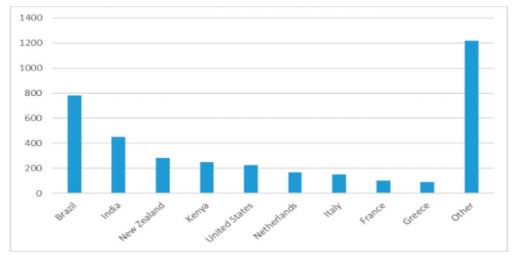 Trade in North Africa
The MENA region represents one of the fastest-growing populations across the globe with a market value projected to reach USD $2.6 billion by 2023, expanding at a CAGR of more than 4% between 2018 and 2023. This, coupled with low median age groups and rising disposable incomes, have positively influenced this market growth.
In recent years, extruded snack foods witnessed strong growth in the MENA region, with a market value of USD $2 billion in 2017. Many trade routes have also been established between North Africa and the rest of Africa, helping facilitate trade further.

Trade in Morocco
The US has a free trade agreement with Morocco, while the EU accounts for 51.4% of Moroccan trade and is its leading trading partner. Spain and France account for 50% of total trade from the EU with Morocco. The food sector’s share in total foreign direct investments jumped from 1.5% in 2010 to 26.2% in 2013.

Trade in Algeria
The EU is Algeria’s largest trading partner and makes up 50.3% of Algeria’s international trade. Algeria holds a free trade agreement with the EU, and total trade between the two amounted to €35.2 billion in 2016. Algeria’s main agricultural imports are commodities such as cereals, milk, and oil seeds. The country is heavily dependent on food imports, which account for 75% of its needs, while food spending represents 45% of household budgets in Algeria.

Trade in Tunisia
The EU-Tunisia Association Agreement entered into force in 1998, which established a free trade area under which all two-way trade in industrial products takes place free of any trade tariffs. While in regard to agricultural, agro-food and fisheries products, the EU and Tunisia agreed to a progressive opening of their respective markets for selected products.
The total trade in goods between the EU and Tunisia amounted to €20.5 billion in 2017, while agricultural products amounted to €0.5 billion, making up 6.1% of total EU imports from Tunisia.

Fi Africa
In 2020, Food ingredients Global, the world’s leading food and beverage ingredients platform, is branching out to the MENA region with the launch of Fi Africa in Cairo, Egypt, as part of Africa Food Manufacturing and its co-located event, ProPak MENA. The event will take place from 15-17 March 2020 in the Egypt International Exhibition Centre, Cairo.
This new combined event will gather a diverse audience of leading domestic and international ingredient suppliers, distributors, and food and beverage manufacturers from across the wider food and beverage ingredients supply chain.
Fi Africa will be jointly organised by the Informa teams in Amsterdam and Egypt – a winning combination of local market knowledge from Egypt with a global perspective from the Fi Global office.

Learn more about your opportunities at Fi Africa

Today’s consumers are busier than ever, notes Naturex, pointing out that, according to Innova, food and beverage launches tracked with an on-the-go claim grew by 23% between 2017 and 2018.

We will be exhibiting at Natural Products Expo West in Anaheim, California. Please stop by for a quick visit at Booth 3623!

To highlight their latest product innovations Prinova showcased a range of scientifically proven ingredients and custom formulations at this year’s Fi-Asia in Bangkok.

The organisers of Fi Europe and Ni have lifted the lid on a few of the top show features.

Nestlé collaborates with OpenSC on blockchain

Nestlé says it will break new ground in supply chain transparency through a collaboration with OpenSC – a blockchain platform that allows consumers to track their food right back to the farm.

Chr. Hansen has delivered what it describes as a solid financial result of 9% organic growth for the first nine months, but has adjusted its full-year organic growth outlook from 9-11% to 7-8%.