With the European Union (EU) reviewing its regulation on acrylamide in 2023, food manufacturers face tighter restrictions on permitted contaminant levels.

Ahead of the European Union’s (EU) 2023 acrylamide regulation review and anticipated updates, the European Snack Association (ESA) has expressed concerns about a surge in wastage without a proportionate reduction of consumer exposure to acrylamide.

Acrylamide is a contaminant that naturally forms in a wide range of everyday foods cooked at high temperatures. “Acrylamide forms are irrespective of whether these foods are cooked at home, in a restaurant or produced by manufacturers,” says a representative of the ESA, a trade organisation representing the savoury snacks industry.

Initially detected in food around two decades ago, the food manufacturing industry has since collaborated with the European Commission (EC) and researchers to identify tools to help minimise the chemical substance’s formation.

The current EU Regulation was introduced in 2017 following a request by the food industry. It legally requires manufacturers of certain products to apply a series of specified mitigation measures to reduce acrylamide levels. These measures follow the ALARA (As Low As Reasonably Achievable) principle.

To support manufacturers and regulatory enforcement, the 2017 EU regulation introduced the concept of benchmark levels and established them using the most recent occurrence data from the European Food Safety Authority (EFSA) database. Benchmark levels are performance indicators used to verify the effectiveness of mitigation measures.

The regulation requires that these benchmark levels are reviewed on a regular basis. The ESA understands that the European Commission (EC) and EU member states are currently working on this review and plan to introduce benchmark levels for products that the Regulation has yet to address.

“As ESA, we are very supportive of this approach and we aim to continue a constructive dialogue with the European Commission, EFSA and the member states to identify where further steps can be made to protect consumers,” says the ESA representative.

“This regulatory approach has worked very well and has led to a significant reduction in some categories of food, including potato crisps,” says the ESA representative.

While there has been a marked difference in the presence of acrylamide in certain food segments, such as potato crisps, six years after the introduction of the regulation, the association recognises a lack of homogeneity. “For potato crisps, we are concerned because of the well-documented natural variations in precursors in individual potatoes and across seasons and geographies.”

Conveying credibility via standardisation helps to assure consumers and create trust in the food products they select, purchase, and consume. “European consumers can take confidence in the fact that there is a regulation in this area and that tools are being effectively applied,” the representative adds.

The reality of setting maximum limits

Proposals for establishing maximum levels for some products are also thought to be under discussion.

Controls in factories can be implemented in a uniform and controlled manner. However, due to issues with raw material variability, manufacturers would face challenges in maintaining production unless legal thresholds were set at a very high level. “Production in some countries, or of some products, would no longer be possible,” says the spokesperson.

As a result of this variability in raw materials, manufacturers cannot eliminate variation in occurrence levels to the extent that they could ensure all their products would meet a single value all year round.

The challenge of raw material variability is further compounded because acrylamide can only be tested for in finished products. “Despite significant research, there is still no rapid or in-line testing available,” says the ESA spokesperson.

Variation within an individual batch also means that, even when products are tested, there is a “very real possibility” that the product released to the market could subsequently be retested and subjected to a withdrawal. 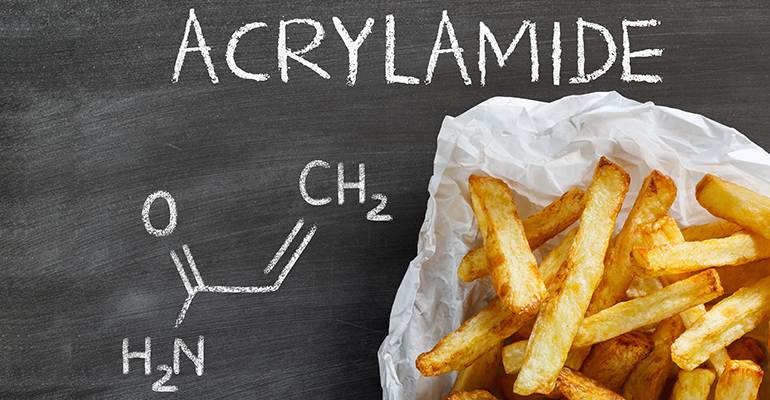 “We would be very concerned that, if introduced for the category, maximum levels would lead to a massive increase in wastage without a commensurate reduction in consumer exposure."

An increase in wastage may come from various sources, including raw materials, finished products, packaging, energy and transport.

If implemented, the ESA anticipates that production in some countries or of some products may no longer be possible. Further, the additional costs associated with production and waste disposal are expected to be pushed onto consumers.

US and UK approach

The US Center for Disease Control and Prevention asserts the importance of considering time, distance and shielding to avoid exposure to radiation that does not confer a direct benefit to consumers. ALARA applies even when this dose is small.

The UK’s Food Standards Agency provides guidance on acrylamide legislation, most recently updating it in 2021. It highlights expectations on businesses and directs visitors to information on best practices, mitigation measures and benchmark levels.

What do falling sales and disappointing profits mean for the plant-based category?

Beyond Meat, Impossible Foods, and Oatly are restructuring amid falling sales and one plant-based brand, Tatooed Chef, is considering adding meat to a new range to boost profits. Is there light at the end of the tunnel for plant-based meat and dairy al...

What’s next for Australia and New Zealand’s alternative protein scene?

A partnership between FrieslandCampina Ingredients and Triplebar Bio will bring animal-free dairy protein to market, a sustainable alternative to traditional dairy protein produced via precision fermentation.

Kerry to sell sweet ingredients portfolio for €500m to IRCA

Irish ingredient supplier Kerry will sell its sweet ingredients business to Italian food ingredients maker IRCA for €500 million as it looks to focus on areas where it can create the most value, its CEO said.