PepsiCo said in a press release that the “demand for lemon lime flavored soda has never been greater,” making it an opportune time to challenge category leaders like Sprite, owned by the Coca-Cola Company, and 7-Up, owned by Keurig Dr Pepper.

Starry is already rolling out in the US market with regular and zero sugar formulas that are caffeine-free. Starry, and the predecessor that it is replacing, Sierra Mist, share a lot of the same ingredients, and both have been positioned as direct competitors to Sprite and 7-Up.

"With Starry, we were able to create a game-changing recipe with the perfect balance of lemon lime flavour and sweetness compared to the competition," said Danielle Barbaro, vice president of research and development at PepsiCo Beverages North America.

PepsiCo is not being shy about its intentions to market the soda to young people, calling Starry “the soda for a generation of irreverent optimists” and “made to speak to Gen Z.”

It is a significant effort by PepsiCo to re-capture the under-25 demographic, which has become elusive to traditional soda brands. Younger generations have shown that they prefer functional beverages that are clean, sustainable, and socially responsible, and that they perceive soda and other sugary drinks as negative and unhealthy.

Starry’s targeted branding is an attempt to change that. PepsiCo kicked off the launch campaign by sending Starry to social media influencers, many of whom posted reviews of the drink online on platforms like TikTok, Instagram, and YouTube.

And with its tagline “Starry hits different,” PepsiCo is trying to appeal to internet-savvy customers. Official social media accounts for the drink are already active and using a noticeably casual and youthful brand voice. In its first tweet, Starry said, “Now that we’re real, we’re seeking #Starry stans, so uhhh do your thing...?” 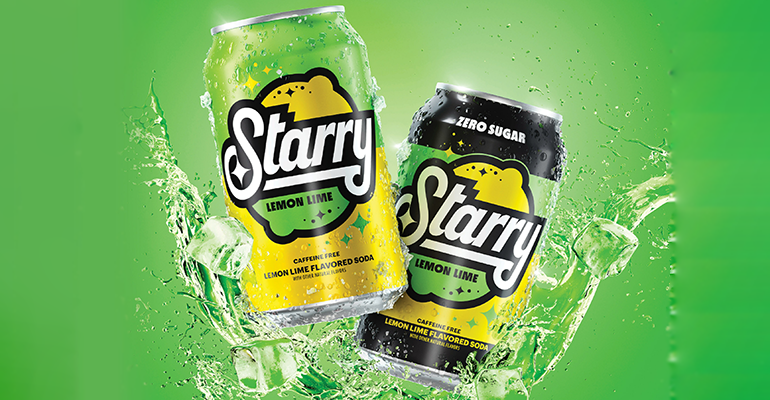 By comparison, accounts for other PepsiCo beverages, like Pepsi and Gatorade, use a more formal and universal brand voice online to reach a wider customer demographic.

PepsiCo said that marketing plans for the Starry brand will include a national TV commercial, digital, and social content, and partnerships within sports and entertainment.

Just days after the official Starry launch, PepsiCo announced that it also reformulated another one of its flagship beverages, Pepsi Zero Sugar.

Diet, low sugar, and light soda drinks have a bad reputation when it comes to taste. With more people making the switch to flavoured sparkling water or similar alternatives, soda brands are aiming to ensure that their zero sugar drinks taste as close to their regular counterparts as possible.

Through its own internal testing, PepsiCo said consumers considered the new Pepsi Zero Sugar formula to pair better with food, and to be more refreshing and smoother than the previous formula.

Value-seeking US consumers cut back on food spending

Many consumers want the mental focus of caffeine without the jitters, prompting a wave of product development such as “half caffeine” ground coffee or ready-to-drink (RTD) cold brew blended with relaxing botanicals.

enduracarb® is a science-backed, slow-acting carbohydrate that can power athletes’ performance. Produced using a high-purity production process, it is suitable for a wide variety of applications.